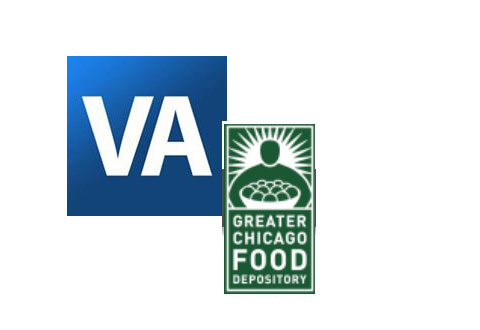 On February 10, 2015, Kim Galvin was commended, on behalf of American Airlines, for their donation of winter coats to the Jesse Brown Food Pantry. When the company decided to change logos, these warm, high quality coats were made available to homeless Veterans.. The Acting Network Director was on-site that day and witnessed, first-hand, the excitement that could be felt as Veterans, while visiting the Pantry for needed food items, received the additional bonus of the high-quality winter coats being offered from a grateful group of volunteers. As the Veterans tried on different sizes, smiles lit up many faces in the room. Approximately 195 items were distributed, which allowed each Veteran who requested one to leave with a warm winter coat to protect against the lingering Chicago winter.

When personally thanked by the Acting Network Director for the generosity shown by American Airlines employees, Ms. Galvin humbly replied, “It’s truly the least that I (we) can do for those who have given….everything.”

Get help from Veterans Crisis Line

If you are in crisis or having thoughts of suicide, visit VeteransCrisisLine.net for more resources.