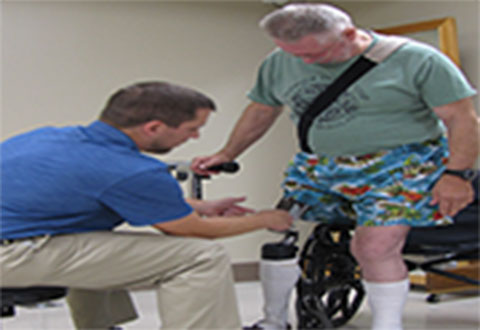 Josh Dezek makes a few adjustments to Rod Lough’s prosthetic limb. Below: Lough tests out the adjustments in front of Dezek to ensure the limb is suited to his needs.

Boxes of artificial feet, legs and arms are stacked high inside the prosthetics workshop. The department just completed a move to a bigger area to make room for some high-tech machines.

Josh Dezek, prosthetist at the Milwaukee VA, uses the limbs and machines to create prosthetics for Veterans.

Prosthetists are members of the Prosthetics department. They fit, design and create all the artificial limbs given to patients. Dezek’s work as a prosthetist helps Veterans regain the ability to do everything they used to do prior to their injury.

If you meet a prosthetist, it’s like finding a four-leaf clover. Only nine colleges in the country offer a degree in the field.

“There are not a lot of colleges, maybe eight or nine, that offer the degree,” said Dezek. “It’s a rarity, really.”

Dezek’s job is not limited to the Milwaukee VA. He serves as the prosthetist for the Madison, Tomah, and Iron Mountain VA. He also works at all the Milwaukee VA Outpatient Clinics. It can be hard at times, but Dezek said he looks at it in a different way.

“I get to serve Veterans, and that’s my number one priority.”

Dezek is a member of the Amputee Care Team at the Milwaukee VA, along with two other members, Sue Novak and Dr. Judith Kosasih. The group meets twice a month to review cases of Veterans who are receiving a new artificial limb, or getting a replacement limb.

“If it’s appropriate and can improve their lives, they get it.”

Dezek said the team is not limited financially in what they can provide Veterans.

“The freedom to get (Veterans) what they need is great. Private sector can be limiting, because you have to see what the insurance covers and if it’s not enough they don’t get it. We don’t have those limitations here.”

The process is pretty straight forward.

Dezek meets with the Veteran, and determines their functional level. He listens to the patient on what their wants and needs are for their new limb. He takes a cast of the limb, either digitally or with plaster and creates a test socket, which is where the artificial limb and the Veteran meet.

The Veteran tries the limb out and Dezek makes adjustments to make it comfortable for the Veteran. The Milwaukee VA also requires something the private sector does not: prosthetic training.

“Once adjustments are made the Veteran takes the test socket home and tries it out, and then they go to prosthetic training to learn how to use their new artificial limb,” said Dezek. “And that is a huge part of the process.”

On this day Dezek meets with Rod Lough, Navy and Coast Guard Veteran. He receives his care at the Green Bay clinic but came down to Milwaukee to get his artificial limb adjusted. Lough had his entire right leg amputated in October 2013 due to a bone infection.

“I was in so much pain I just told them to take it off,” said Lough.

Lough said he was determined to walk again.

“Do you want to get better or sit in a wheelchair the rest of your life?” he asked.

Lough’s one thing is to take his wife away one day on their sailboat “where it’s warm all the time.”

Dezek said it’s uncommon for people with as high of an amputation as Lough’s to be able walk again.

He said with the help of the Milwaukee VA and Dezek he’s moving closer to that goal.

“Josh is a very uplifting individual. He makes me feel like I am the only one that matters. If something ever comes up he gets right on it.”

After adjustments are made Dezek straps the limb onto Lough, and minutes later he is walking. Smiles on the faces of Dezek, Lough, and Lucinda show today is a good day.

Dezek sees more and more Veterans like Lough come through the Prosthetics department.

“Whether it’s an Iraqi or Afghanistan Veteran, or an older Veteran, the population of Veterans in need of artificial limbs is growing. We needed this new space and equipment to serve them, the Veterans.”

Get help from Veterans Crisis Line

If you are in crisis or having thoughts of suicide, visit VeteransCrisisLine.net for more resources.